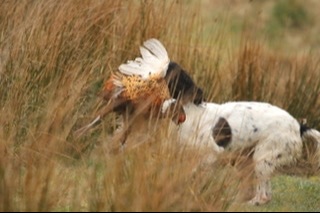 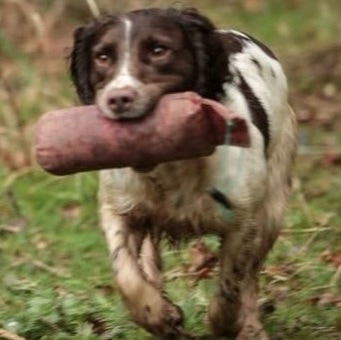 The name ‘Spaniel’ is derived from the French name for Spain, Espaniol, and the Spaniel is believed to have originated in Spain. Originally both Cockers and Springers were born in the same litters; the smaller ones being used to hunt woodcock; the larger for springing (or flushing) gamebirds into the air where a falcon or hawk would bring them to the handler.
Many Spaniel breeds were developed during the nineteenth century often named after the counties where they originated. These days there are no less than 12 different breeds of Spaniel registered with the Kennel Club: Cavalier King Charles; Clumber; Cocker; King Charles; American Cocker; American Water; Irish Water; Sussex; Field; Welsh Springer; English Springer and Tibetan Spaniels. Of these only the Cocker and English Springer Spaniels feature in Trials. There were two original Spaniel clubs; the Spaniel Club of England and the Sporting Spaniel Society which combined to hold trials and in 1902 this lead to the recognition of the English Springer Society breed by the English Kennel Club and in 1914 the 1st Field Trial Champion, Rimington Sam was crowned. His dam was a cocker. Rimington Sam is considered one of the foundation sires of all modern field trial lines.
The spaniel section of BWWGS, provide different activities for spaniel members of the club. Main activity being trials, we hold four to five trials each season, trials are held for novice cockers, novice springers, open cockers, open springers and when ground permitting we have an AV (any variety) trial. The spaniel committee are all involved in organising ground, judges, helpers to give our members an enjoyable day and so they can show off the talents of there dogs. We also have a test secretary who organises two test during the spring/summer months, the two tests consist of a novice and open AV, usually held on the same day. Although it's a competition there is a element of light hearted fun. The judges are usually very helpful and especially if you are new to the sport of gundogs they will give you valuable advice and support where needed. As well as the tests, we also compete as a club in team tests, this is where surrounding clubs alike gather to battle for the best club team, these tests are competitive but with good friendly banter.
We have two very successful spaniel handlers on our sub committee, who kindly give up a couple of days in the spring summer months to hold a training day for anyone who has a spaniel and is wanting some guidance, these training sessions are usually a small group on each day so each handler can have quality amount of time with the trainer, but you will also learn a great deal watching others too. Its a great way to meet new people who are like minded and if your not a member, you can join on the day. We welcome anyone who is interested in spaniels to come and watch our trials & tests, we are always looking for people to help out on these days, so any volunteers would be appreciated and made welcome.